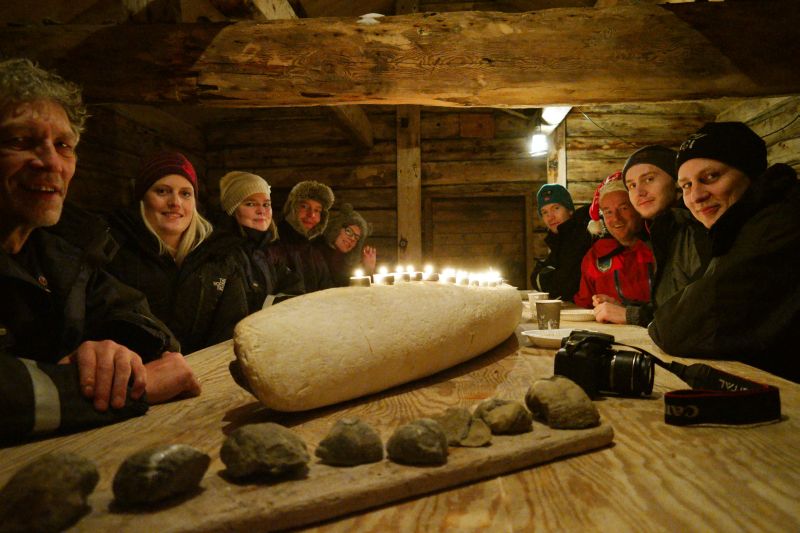 The ghost of Christmas past did not revisit Bjørnøya this year.
Last time I spent the holidays up here it was stormy. Right now the breeze is gentle and light strato- and altocumulus clouds allow the full moon to shine a light on our existence. The powdery snow is shimmering in the moonlight and the sea sighs gently as it meets the shore. On Christmas Eve it was so quiet that three of us (“us” being a crew of nine, and the only inhabitants on the island) decided to make our Yuletime bath a salty one. Following tradition, the whole crew ate rice pudding in Hammerfesthuset, the oldest building in the Svalbard Archipelago. Afterwards we stoked the fire in our sauna and went tiptoeing down to the beach, clad only in swimsuits, woolen socks and a light fog. Risk of frostbite was low, because the sea temperature was a whopping two centigrade. The only casualties were a couple of the previously mentioned woolen socks, who made a narrow escape towards the horizon. We have notified the crew on Hopen Island, the next meteorological station (about 150nm away) to keep a lookout. In all honesty we were too full to swim in pursuit.

And the fullness continued.
I believe our chef Bjørn Ove must have studied at Hogwarts. According to the pork connaisseurs around the table he managed to create a perfect Christmas Rib out of salted meat not really intended for the purpose. It’s what we had in the stores, and there are obviously no shops around to get more supplies. So what he did was quite a feat. Everything that landed on my plate was pure magic too, especially the cloudberries he brought with him from Leksvik. Yum. Today the crew have been resting their bellies and skiing around the area, making space for more. This measure was highly necessary, as the “lutefisk” took on epic proportions this evening. There is a lot of poetry in a good meal. The poet of the night (Kristine the cook) also put a lot of care and imagination into our Christmas stockings. She hid them around the station, giving us riddles and hints in order to find them.

Yuletime shenanigans.
The huskies are playing and cuddling and seem very happy these days. They certainly appreciated it when we girls dug out a cave in one of the snowdrifts. We are currently adding touches to the interior in a tasteful, Arctic style to make it more inviting for the polar bears. There is no ice, and thus no bears around for miles and miles and miles. At the moment it seems evident that our little cavern will be used by glühwein enthusiasts with bear hats rather than real bears for quite some time. When we’re not eating we will spend the remaining days of the year composing music for the crew at Hopen Meteo. Following tradition, the crews on both stations will perform a song for (and about) each other over MW radio on New Year’s Eve, most likely on 1757kHz. You are free to listen in. Myself and Ragnhild (a bona fide meteorologist) will also train for our big performance. We are putting on a show of tandem kickbike acrobatics down the longest corridor of the station, lovingly called “isbjørngangen” (it’s basically a 76m long hallway connecting two buildings so we won’t get eaten by polar bears on our way to send sounding balloons). Stay tuned for viral youtube videos or pictures of bruises.
A Merry Yule to all of you, and I wish you a sparkling year to come!