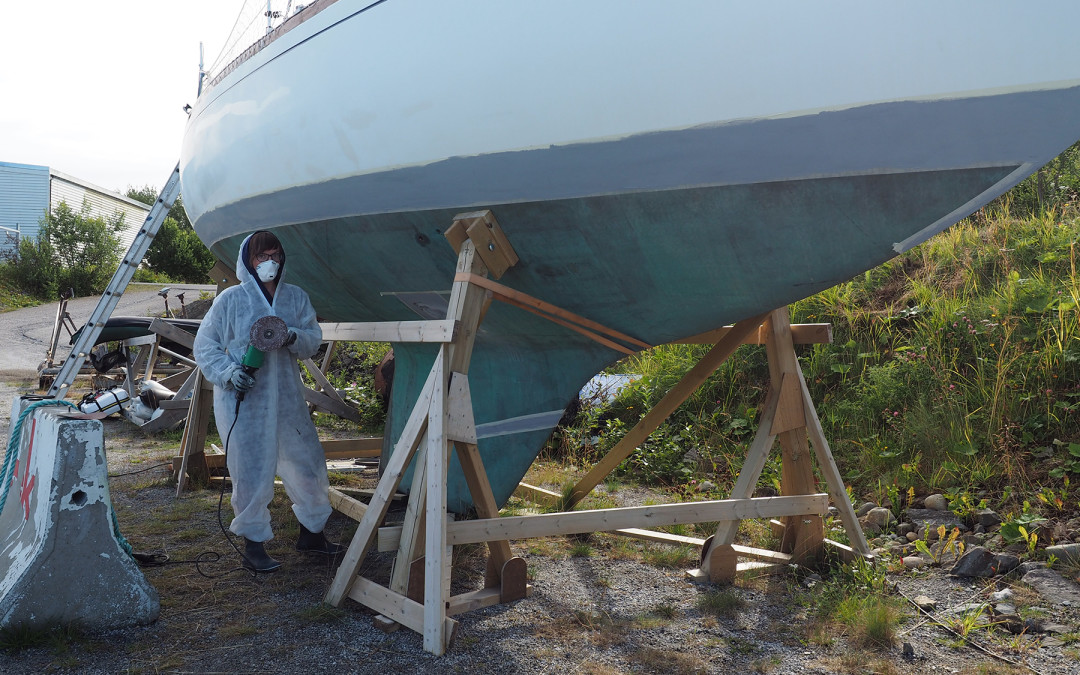 Home is where the boat is
After being away from Pyxie for eight(8!) months, it felt beyond amazing to be back home on the boat. But I wasn’t going to sail off into the sunset, not right away. I had a thing or two I wanted to upgrade and fix first … Two months later and I have done a fair chunk of the refit needed for serious offshore voyaging. Plus, and this is important to me, I have installed some solutions for an even greener boat! Hang in there, I’ll get to it in a bit.

Can we fix it? Yes we can
The expression “if it ain’t broken, don’t fix it” does not apply on a sailboat. Because if – or when – stuff breaks, there can be severe consequences. Waiting until the boat sinks is not the best of ideas. So while Pyxie was out of the water, I decided to take care of some issues on the hull. Or, rather, through the hull. Quick explanation for landlubbers: Wherever there is an outlet or intake for water, there is, obviously, a hole in the boat (a.k.a. through-hull). The same goes for things like the log (speed measuring thingie) and in some cases depth transducer. A wise person once said “the safest number of holes in the hull is zero. Most boats have at least seven.” Pyxie fell into the latter category. Two of them were not in use, so why keep them? I wasn’t having any such nonsense, so I drilled them out and added about fourty layers of fibreglass instead. Probably the scariest thing I have done so far in my sailing career. I literally cut open two huge holes in my boat. Luckily I had an amazing book, Don Casey’s Complete Sailboat Maintenance Manual, to help me through the process. It was gifted to me by a good friend who also gave me tons of advice along the way. Thank you so much, Lars!

Old, cranky cocks
Fitted on the through-hulls, inside the boat, there are seacocks. They’re called cocks because they inspire that kind of language when they don’t work. The purpose of them is to provide a way of closing the hole in the boat. Nifty, in other words. Broken seacocks and through-hulls are not just a theoretical safety hazard. Boats sink because of them. A neighbouring sailboat sank in its berth back in Oslo. I knew my seacocks were old, and one of them was frozen in a semi-open position. Strong men had tried and failed to move it, but it seemed impossible. Well, impossible is nothing. There was a jungle of hoses for the head (a.k.a. toilet) blocking access to it, and I was getting mighty p… off at the whole thing. It provided the perfect excuse to get rid of the sea toilet, one of the least eco-friendly things on the boat. Sure, it had a holding tank. A pretty small holding tank that nonetheless filled nearly the entire space underneath my bunk in the forepeak (so many hoses!). And whenever I pumped out, it stank. It felt like I had a smelly monster with tentacles snaking around in the underbelly of Pyxie. Armed with protective gear and powertools, I ripped the whole thing out. If you find decluttering your desk drawer satisfying, imagine pulling out dirty hoses and clearing lots of storage space under your bed. And I finally got that damn seacock changed. Yes, it felt good.

Airhead
To replace the old toilet, I decided to get a composting toilet. I had wanted this ever since I got Pyxie, and the timing was perfect. Unfortunately, there are no distributors of good quality composting toilets for marine use in Norway. But I found one in Sweden! Nuno Antunes, a Portuguese sailor and really interesting human being, loved his AirHead composting toilet so much he started importing them. So I contacted him to see if he could send one to Norway. Indeed he could! Nuno’s service and help was excellent, and shipping fast. I couldn’t be happier.
Good people usually have good stories, and Nuno is featured on my favourite sailing podcast On the Wind (then called 59 degrees North). You can find the episode with Nuno here, along with a whole range of other interesting interviews and resources. Highly recommended!
Installing the AirHead was a breeze, and I am so happy I did it. I can now truly say that I don’t pollute coastal waters with sewage! And, nope, it doesn’t smell. It’s not gross at all, actually. Some might think I’m retrograding rather than upgrading, and that a composting toilet is somewhere along the lines of a bucket or port-a-potty. Nothing could be further from the truth. I believe composting toilets are the future. Regulations for pumping out are getting more strict, and for good reason. The only thing I’ll miss about the old sea toilet is flushing at night and seeing lots of sparkling fluoresence swirling in the toilet bowl. But what more than weighs up is that I can now go night swimming, surrounded only by sparkles and not by … poop.

Fire, walk with me
Since Pyxie has an electrical engine, it felt really backwards that I was heating her with diesel. Sure, the Dickinson heaters are phenomenal. But I was tired of pouring diesel down my arm every time I refilled the tank, and of getting diesel in the bilge. Stinky and bad for the environment. Sure, I tried using bio diesel whenever I could find it, but it was far from a perfect solution. So I decided to install a small wood burning stove instead. I found the perfect match, a Pipsqueak! Super cute and small, just right for getting cozy on autumn and winter nights. It can burn bio pellets of leftover sawdust or wood from our plentiful forest in Lofoten. Plus, I can collect driftwood and dead, dry branches when I’m anchored, so fuel can be as good as free – and make a very small impact on the planet.

Blue Flag
Installing the composting toilet and wood burning stove made me feel like it was about time Pyxie flew a Blue Flag. You might have seen it on beaches and marinas, and occasionally on boats. It’s a great sign. It means measures are being taken to protect the marine environment. Clean beaches and safe water to swim in is one consequence. Healthy marine ecosystems is another. Although you and I might feel like we are but small individuals without much impact on the global environment, we can all make a difference. Our individual choices impact the world, right here and now, and are all part of a larger picture. Plastic waste, chemicals and sewage from private boats are very real problems in coastal areas – and so unnecessary. Any boat owner can go online, read up and pledge to follow the code of conduct, and for that get a Blue Flag or sticker to spruce up the boat with (In Norway, go here!). It’s a great way of spreading the message, like ripples in water.
I encourage everyone with a boat, beach or marina to take the plunge!