sitting on a volcano

Gone bear … where? This little bear is currently spending six months on Jan Mayen, Norway’s westernmost territory, working on a meteorological station. The island is nestled on the Mid-Atlantic Ridge between Norway, Greenland and Iceland, and has the world’s northernmost active volcano, Beerenberg, as its main landmark. Though I spend most of my outdoors leisure time trotting up and down mountains, island life is also about slowing down. Here is a slice of my adventure, a quiet moment frozen in time:

So here I sit, at the base of a live volcano, staring at the sea.

Actually, we are in this together. You, me and everyone we don’t know, sitting on a ball of lava hurdled through space. We are made from it, part of it and will melt back into it at the end of this lifespan we have been granted, pauper like pope, plumber like princess. That’s a pretty sobering thought, if you ask me. Why not enjoy the ride and then dissolve in graceful insignificance, leaving as little trace as possible for the next generation to suffer? The phoenixes rising from our ashes deserve a habitable nest, don’t they? These are the ponderings that float by as I sit here quietly on a volcanic hotspot far away from anything and everything. Maybe it is the proximity to molten rock that inspires this array of cosmic clichés. Maybe it is simply the absence of civilisation with all its clever distractions. Spending six months on a desolate island provides the time and space to air out brain clutter and simply be, savouring the sheer beauty of this magical island, beach combing for smooth, black stones and odd pieces of petrified lava, collecting mountain peaks like sea shells and exploring the craters of infernos long since past.

It also allows me to spend hours relishing the art of being idle: staring at the horizon where a rare fishing vessel goes by, sipping coffee in the sun and thinking about nothing in particular until a cheeky pun comes to mind and my colleague’s warm eyes erupt in heartfelt laughter, delightful lines radiating like sunbeams across his face, blissfully unharmed by modern anti-aging technology. Thus bringing my ponderings full circle to what matters and what most certainly does not. Have we forgotten that those lines around the eyes are nothing but good times that linger? Is it fear of our inevitable end that makes humans collectively buy expensive skin treatments, stay out of the sunshine and forgo delicious coffee? Do we think it will bring us closer to immortality or redemption? And is it the same fear that leads to contagious busyness, providing enough distraction to stop asking questions and enough income to keep buying All The Stuff? 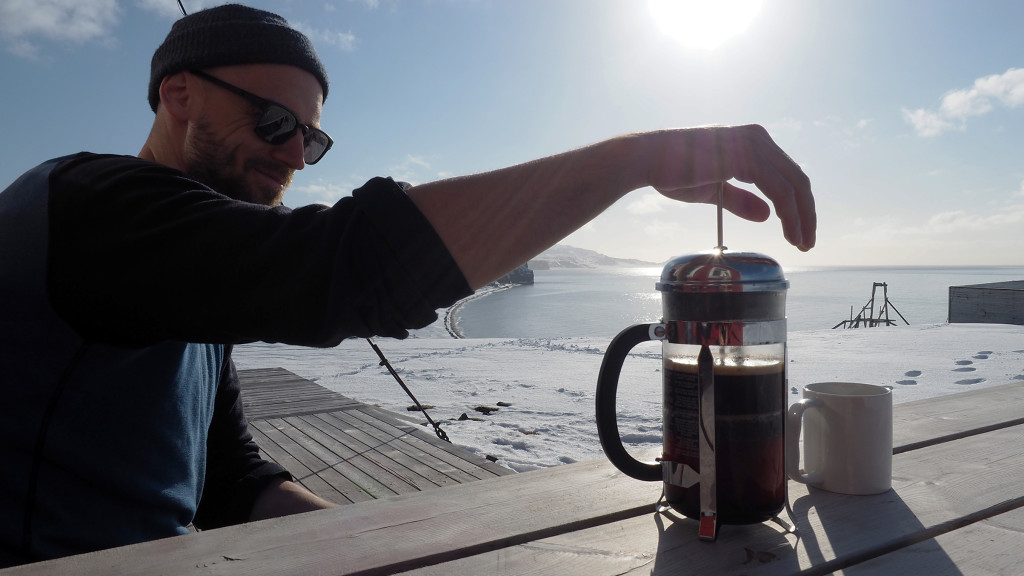 All I know is that I feel more alive when I just sit in the sun with a cuppa, good friendship and bad puns. I watch the horizon and produce nothing but freckles, wrinkles and giggles. Soon enough I will get back to work and send weather reports, helping the lone fishing vessel to hopefully stay safe at sea. So don’t get me wrong, meaningful work is not the same as busyness, in my opinion. I just refuse to be busy for the sake of being busy, numbing senses and curiosity into obedient adulthood. Call it silent rebellion. Call it being lazy. Either way is fine. Honeybadger don’t give a shit. Or, as the popular adage has it: I give zero fucks.

The boat passes. The sun takes a dip. I sit through the blue hour.